I’m happy, fit and healthy and work out 3 times a week!

​My name is Helen Bradbury and I'm 50 years old. Here is my breast cancer journey... 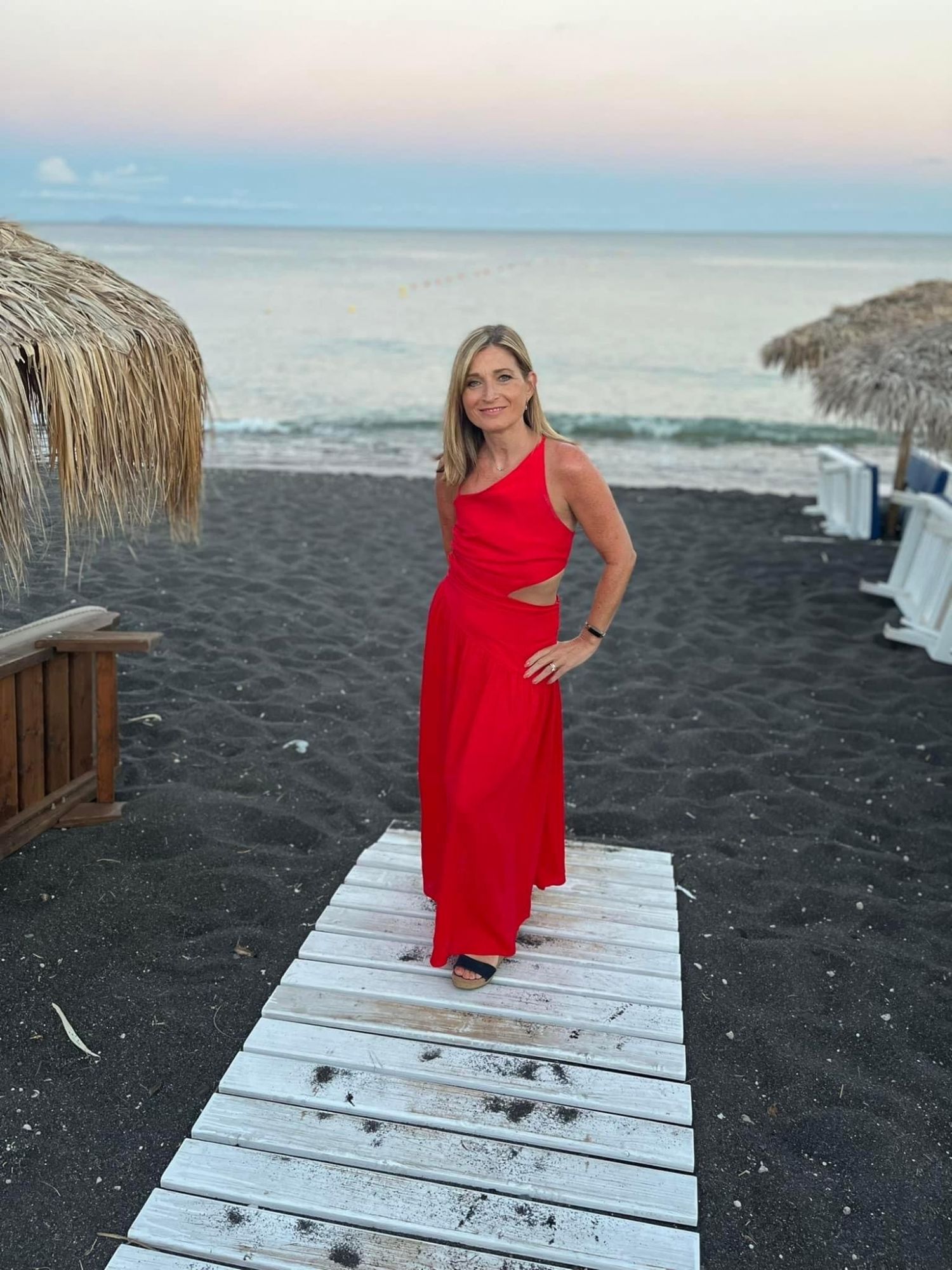 I'm married to Nick and have a 16-year-old daughter and a 13-year stepson. In October 2013 I found a few little bumps in my breast, nothing particularly obvious but it just felt a little strange, having a history of breast cancer in the family, my mother passed away in 2009 of secondary breast cancer after being diagnosed 16 years earlier at the age of 46 where she herself had a mastectomy on her left breast. I decided to make an appointment with my GP and get it checked out. After a mammogram and ultrasound, it was decided that I would need a biopsy too. The results of this confirmed that I actually had DCIS (Ductal Carcinoma In-situ) this is a very early-stage breast cancer that has not begun to spread so thankfully it had been caught early. The DCIS was all around my right breast which meant my treatment would be a mastectomy with immediate reconstruction. This all took place in January 2014. The breast was removed, and I had a shiny, new, pert reconstructed breast in its place. I didn’t need any further treatment other than mammograms for the next 5 years on my remaining left breast.

Fast forward to October 2020… my final mammogram. I had a call back to say they needed to check me again as they think they may have seen something on my mammogram. So here we go again, ultrasound and a more detailed biopsy. Once again I was told they thought this was a DCIS and I would need to have my breast removed, but once again it could be reconstructed, so this operation went ahead. A few weeks after the operation they had the results back from the surgery and it was confirmed that I had a low grade 2 oestrogen positive breast cancer and that my treatment was to take the hormone therapy drug Tamoxifen, and just for good measure because of where it was, I would need to have radiotherapy. The problem with this though, was I had just had a newly reconstructed breast, so having radiotherapy meant that this could potentially damage the new implant. About 6 weeks after my surgery, I had a follow up with my consultant and he was a little concerned at how the scar tissue was healing. As I was due to have radiotherapy in February, he decided to perform an emergency surgery that evening. Bit of a shock to the system, but I suppose at least I didn't have time to worry about it. It was at this point I said to him before the surgery that if there were any issues when he opened me back up, please don't replace the implant, just leave it out completely as there was already a risk that the radiotherapy, I was due to have could damage the implant. When I came round in recovery I looked down at my bandaged chest and realised he'd removed it. I didn't feel sad, more relieved to be honest. This also now meant that the radiotherapy could be delivered in a higher dose in just a week as opposed to a lower dose over several weeks.

After my surgery and radiotherapy, I was quite happy with my almost flattish chest, it just meant now I was odd again. I was given a breast form and I went in search of mastectomy bras as this was something I hadn't had to do before. The only problem was I'd been having a few issues over the past few years with my original reconstructed breast, it had capsular contracted, which means my body thought the implant was a foreign object and formed a scar tissue around it which made the implant hard. As the implant was under my chest muscle this started to cause me a lot of discomfort. So, at my final check up with my surgeon I asked if he could perform one last operation and remove my original implant I had back in 2014. I had to wait around 6 months for this surgery as we were right in the middle of covid, but at the beginning of this year... well February, I finally got the call that I could have it removed. I couldn't wait as I was turning 50 in the summer, and we had two very special holidays booked.

I'm happy with the way I look, and I now have two breast forms, so if I decide to wear something that requires a little more oomph up front, then I can pop them in my mastectomy bra and away I go. I am also equally happy to not wear them. I'm happy, fit and healthy. I work out 3 times a week and have the most amazing family around me.

I would love to model for Nicola Jane, as I feel a confident, 50 year old woman and I embrace my body with confidence. It would mean a great deal to me if my journey and story could be of some support and inspiration for any ladies going through what I have but is struggling to feel confident with their body. My diagnosis and treatment haven't stopped me feeling like a "sexy wife" in the words of my lovely supportive husband. 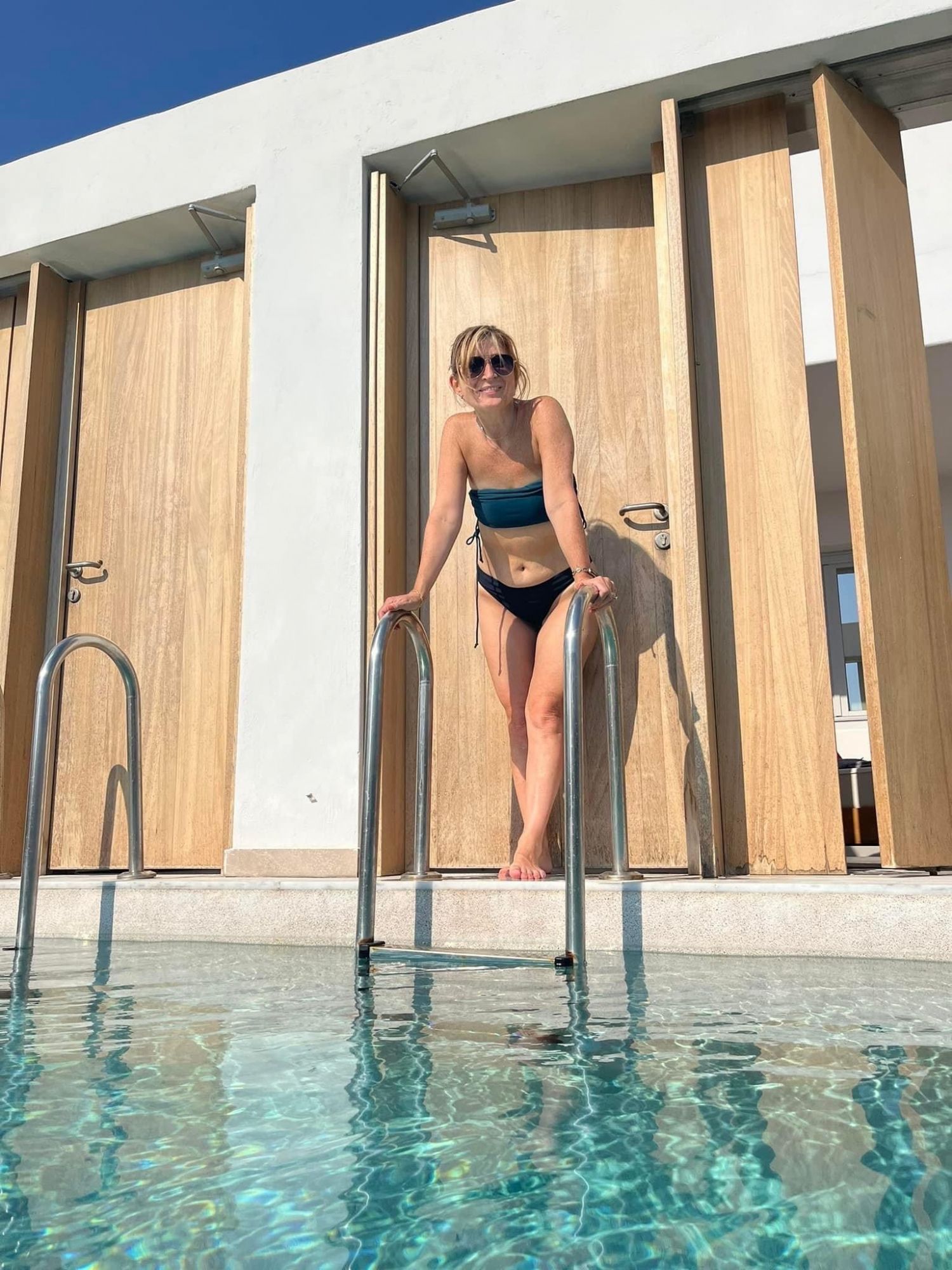 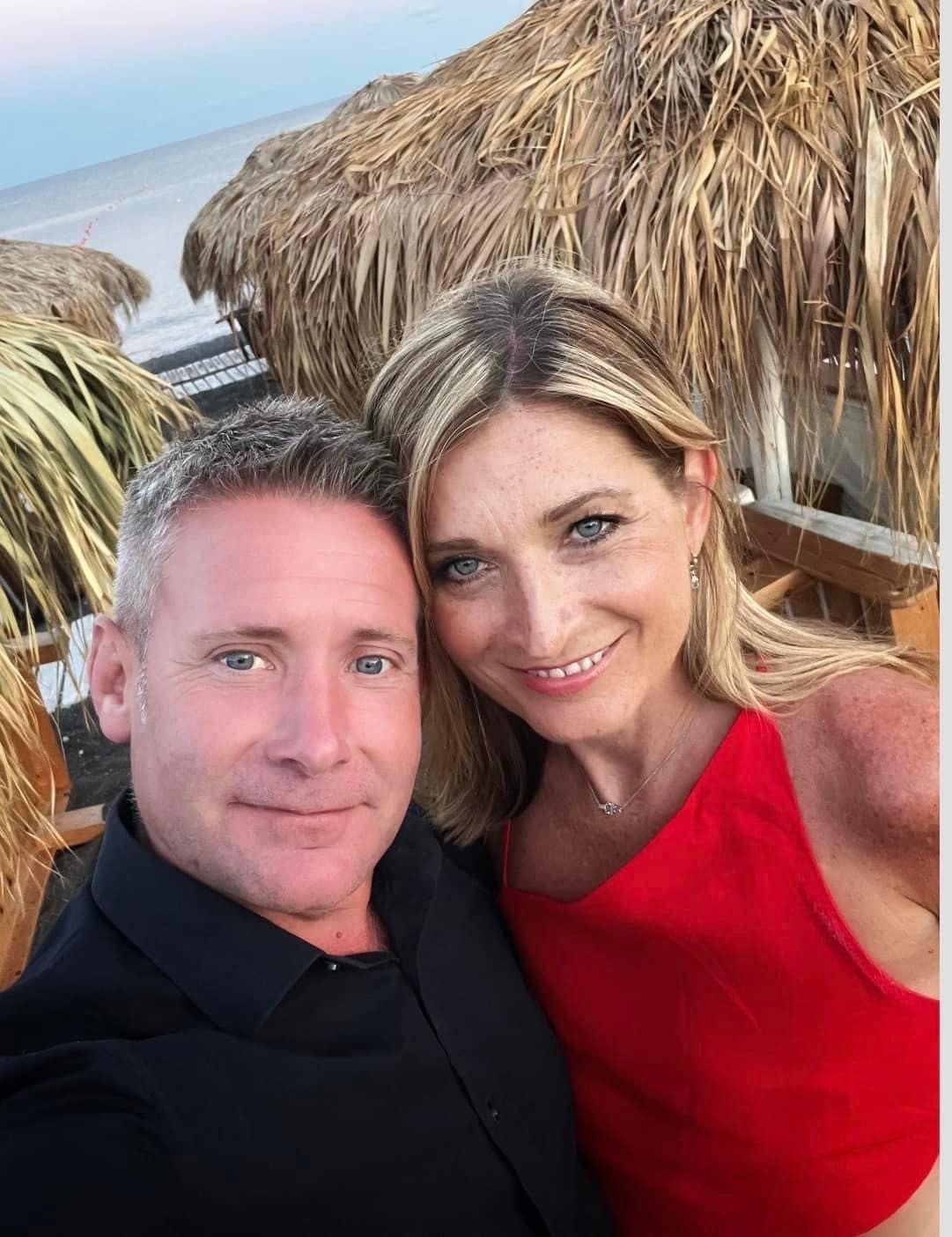 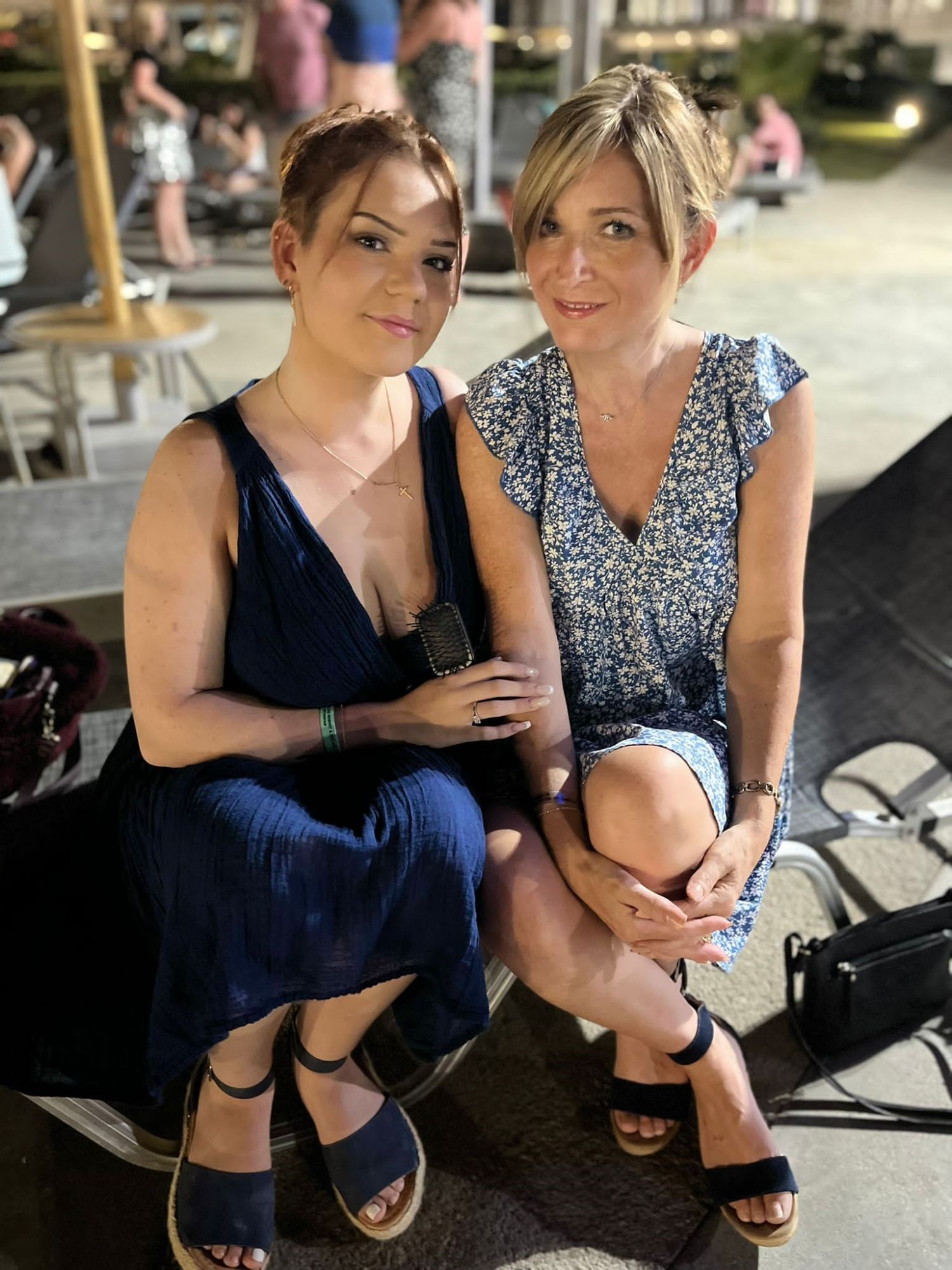 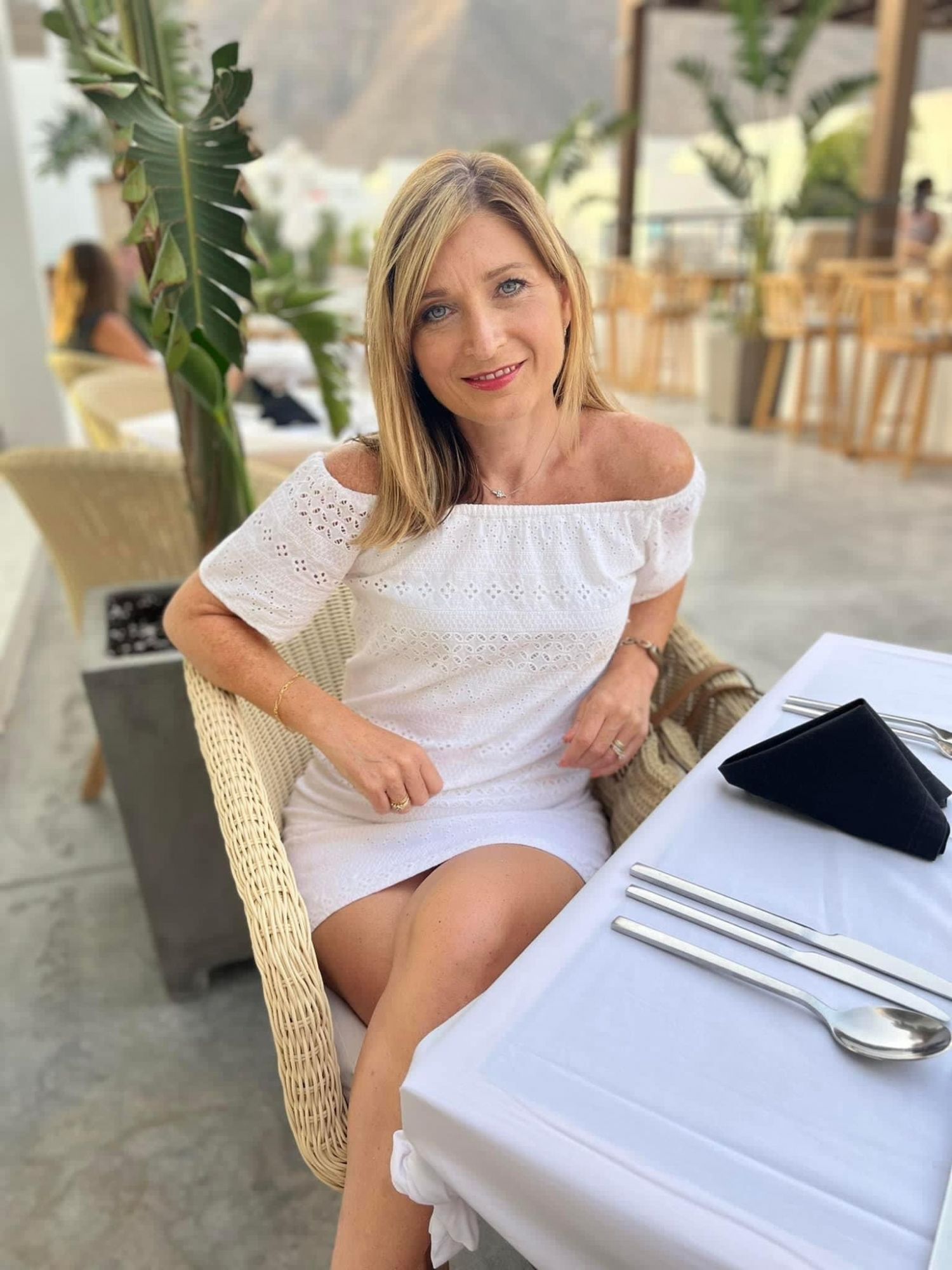