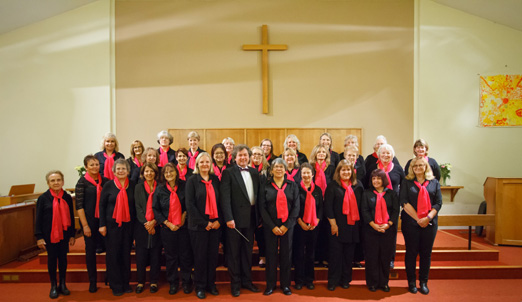 I’d like to tell you about a wonderful group of ladies that I get to spend time with every week. I am part of a choir called Kindred Spirits and what makes us unique is that each and every one of us, apart from our wonderful pianist Margery and our musical director Steve, has had a breast cancer diagnosis and subsequent treatment at some point in our lives.

Kindred Spirits Choir came into being on the 12th September 2013. It all happened following a discussion during a ‘Moving On’ session between Linda (one of our founding members) and Ruth, a Breast Cancer Specialist Nurse at Frimley Park Hospital.

Linda had been recently dancing and singing along to an old Beatles song on the radio when she noticed how much it had lifted her spirits and wondered if there was a local breast cancer choir she could join. After researching the local area Ruth could see that although there were local cancer choirs, they were all an amalgam of all different types of cancer, none were specific.

Ruth decided that starting a breast cancer choir would be a great idea, particularly as it has been shown that singing has beneficial results to mental and physical wellbeing. Whilst looking for a venue, Steve, founder of Aldershot Military Wives became available. Ruth contacted Steve who said it sounded like a great idea and to count him in!

With the venue sorted, musical director on board and a few individuals who had said they’d give it a go, Thursday 12th September 2013 was set as the first meeting. Much to the delight of Ruth and Jane (one of Ruth’s colleagues), 25 ladies turned up to that first gathering. Steve admits to being very surprised at such a good number for a first meeting! The choir’s name 'Kindred Spirits' was chosen because we have all been through similar experiences with the same diagnosis.

Since our first meeting we have grown from 25 to 36 members. Some ladies have joined us for a while and then decided to leave, some have joined us and stayed and sadly due to the nature of the disease 3 of our ladies have passed away since that initial first meeting. We have sung at many events over the last 3+ years, the majority of the events have been to raise funds for charities, in particular the Frimley Park Hospital Breast Care Appeal and the Fountain Centre in Guildford which offers support and various holistic treatments to cancer sufferers and their families. 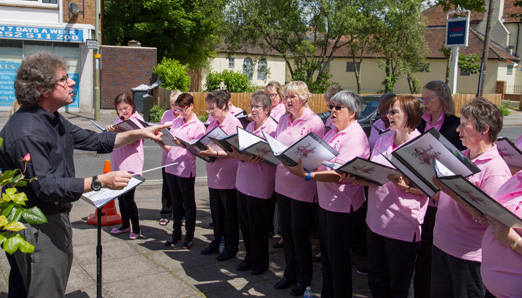 Here are just some of the events we have sung at:

The choir is open to anyone, male or female, who has received treatment for breast cancer at some point in their life. The weekly practice sessions are like a very informal support group, in fact it is so informal that the topic of breast cancer is rarely discussed!  Someone coming along is more likely to hear talk of families, holidays and various social outings.

Anyone interested in joining us does not have to audition and no previous musical/singing experience is required. We meet at Cove Methodist Church, 63 Cove Road, Farnborough, Hants, GU14 0EL every Thursday from 7.00pm, practice actually starts at 7.30pm - 9.00pm, but the ladies like to have a cuppa and catch up before singing starts.

If you live in our area and are interested in joining, or know of someone who might be, please do contact us. We are a friendly group and there is always plenty of laughter to be had at one of our practices.

We also have a Facebook page where you can follow what we are up to: Kindred Spirits Choir