Meet Jen - she is 39 year old mum-of-two, living in Leicestershire. She was diagnosed just a few weeks before the pandemic hit and the lockdown started. Read more about Jen's inspirational journey to recovery: 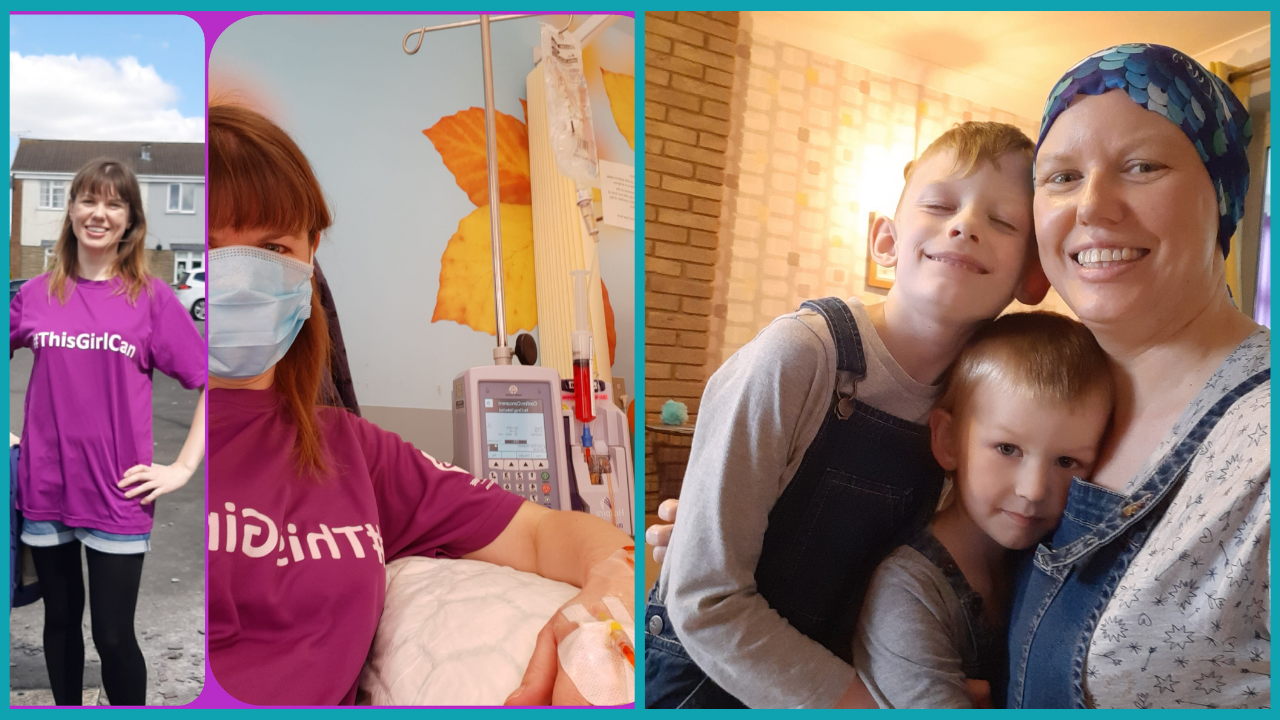 Tell us a little bit about yourself:


I am from Hexham in Northumberland but live in Markfield in Leicestershire after moving to Leicester for university 20 years ago. I am 39 years old and live with my husband Lee and 2 sons; Odin, 8 and Callen 4. I am a Qualified Teacher of the Deaf, which is a job I love.  In my spare time I enjoy sewing, crochet, running, Pilates and day trips with my family.


I first saw my GP, straight after discovering a lump, in July 2019 when I was 37. I was told it was nothing to worry about and to ‘get to know my body’. I took the doctor’s word for this, but still wasn’t comfortable with the lump.

I eventually went back to the GP in January 2020 and was referred for investigation, for reassurance. Two weeks later, on 10th February 2020 I went to the breast care centre, where again I was told my lump felt like nothing of concern, but they would do an ultrasound just to be sure.

The radiographer then very quickly said she would need to send me for a mammogram. I had been so assured there was nothing to worry about that I said, ‘why, can you not see what you are looking for?’ - she very bluntly replied that she could see what she was looking for and it she didn’t like what she could see. I had gone to the hospital by myself (before you had to go by yourself) and had fully intended to go straight to work afterwards. Instead, I was sent for a mammogram, then went back to the first radiographer for a biopsy, she showed me my mammogram and said “if that was me, I’d want a mastectomy”.

A complete shock, when 30 minutes earlier I had been told it felt like a cyst and it would all be ok... My lymph nodes were also swollen on the ultrasound. I will always wonder, but will never know, if the GP had referred me when I first went, would it have not spread to my lymph nodes. It was such an unbelievable shock, all I could think about was my boys, then 3 and 7, and how they were too young to lose their mummy.


The time after your diagnosis and getting used to a new routine:


I live 200 miles from my parents so had to tell them over Facetime, which was awful but not as hard as telling my children. I waited until I had the results of the body scan and biopsy so we knew exactly what we were dealing with before telling them.

The book, ‘Mummy’s Lump’ which was given to me by my breast care nurse, but is from Breast Cancer Now, really helped with explaining everything to them.

My work were great, and my team leader always made it clear that I was more important than work. I was told straight away that I couldn’t work through chemo as I work with children, so we decided we would get through by making the most of my time off (my husband is a stay-at-home dad during the week), going out for lunch, I would be able to do the school run, just little things that would make it all more bearable.


The treatment and surgery:


My dad brought my mum down to stay, and help out with the children, on March 15th, intending to come back and see me the following weekend – (I didn’t see him again until November when I saw him for 2 hours in a park and my mum ended up locked down with us for 3 months).

I had a single mastectomy on March 17th 2020. Being in hospital on the brink of the first lockdown was weird – the nurses were all obsessively taking their own temperatures and talking in hushed tones about the students being fast tracked onto the Covid wards.

My planned recovery of lunches out and day trips were replaced by my children being at home 24/7 and there being nowhere to go! But also with the looming panic of knowing I needed chemotherapy and would then be made vulnerable to Covid-19, all while feeling really well! I think having the children at home really helped to get me through as there wasn’t time to dwell on things but I also think it stopped me from processing what I was going through. My husband works at Asda at weekends and they were brilliant, giving him time off while I had to shield, and meant he was able to make me breakfast in bed everyday!

I met a lady called Janette while I had my surgery and we supported each other throughout the rest of our treatment.

I started 6 sessions of chemotherapy in May, which was horrible but probably not as bad as I had envisaged it being, despite being hospitalised twice with neutropenic sepsis – plus it got me out of the house, and gave me someone outside of my four walls to talk to – who would have ever thought chemo would become me time? I finished chemo in September and then had 15 rounds of radiotherapy in October – I wore a different pair of high heels for every session! Treating myself to a new pair for the last day, when I rang the bell, and also a new pair that never went anywhere near the hospital!


Was there a charity that supported you?


The Osborne Trust were amazing – they are a charity that support children who have a parent with cancer – in normal times they provide days out for the children, usually with a family friend or relative from outside of the home to give all adults in the household a break. During lockdown, Emma quickly evolved her support, and sent out toys, colouring books and special Ozzy Elephants for my boys. (They also have a fabulous book called ‘Mummy’s got a poorly’ which helps explain cancer to small children, which the MacMillan Centre gave me). I didn’t expect anything more from them, but as things started to open up Emma got back in touch and arranged a day out at a local farm for my husband and children.

I have also received counselling from a local charity – Sue Young Cancer Support. And I have been incredibly lucky to get a place on an amazing Pilates programme ran by Michelle Scott-Worthington, called In The Pink. It is especially for anyone who has had breast cancer surgery and has really helped get the full range of movement back in my shoulder.


Covid-19 and going through cancer treatment…


Going through cancer during Covid was incredibly lonely – support groups, make up lessons and wig fittings were not on, you couldn’t go near people to have proper conversations and everyone was wearing masks which just make chatting so much harder, so not only could you not see your friends and family but you couldn’t really make new friends either. In The Pink has given me the opportunity to meet a brilliant group of ladies, and Janette came with me too.

I finished my treatment on October 30th and at the time spent a lot of time worrying about a recurrence or a secondary cancer developing – counselling helped with this, but so did going back to work in January. It gave me something else to think about and reminded me of the capable person I was before cancer. I marked a year since chemo started with a tattoo. The fairy dust is Morse code for f*%$ cancer. I also wear Alive by Hugo Boss everyday now. 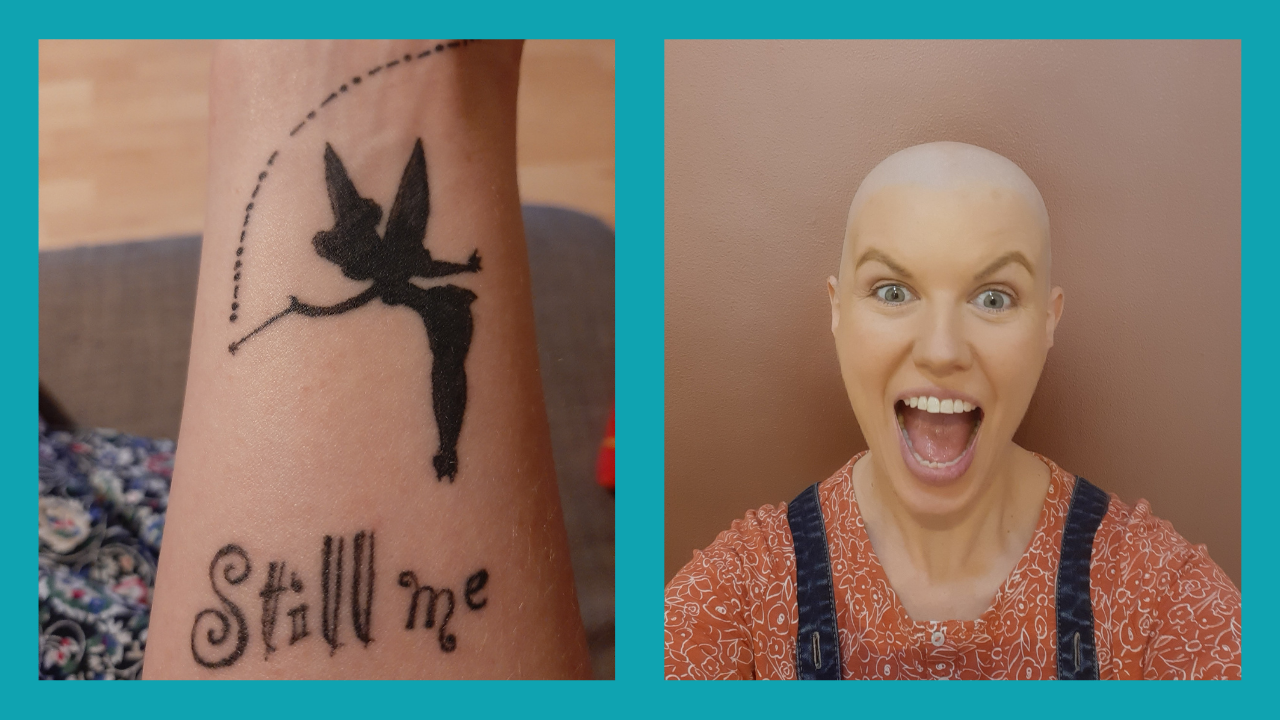 Any tips for other women going through this diagnosis?


I would really recommend that anyone going through treatment reads ‘why I wore lipstick to my mastectomy’ by Geralyn Lucas, which broke me and built me back up again, and the recently released book, ‘The Cancer Ladies’ Running Club’ by Josie Lloyd. They both really helped to validate the feelings I was having and made me laugh and cry!


Do you have any exciting plans for the next few months?


I really wanted to go on an amazing, life affirming holiday when I completed my treatment. Instead, I celebrated getting my second Covid jab with a trip to M&S food. Percy Pigs will do for now but I am really hoping to go whale watching somewhere (anywhere!!) next year.

I am also planning a mastectomy tattoo for my 40th birthday next year as I am 95% sure I don’t want reconstructive surgery – I just want to get on with my life, not spend it recovering from surgery I don’t need to have but I know everyone feels differently about this and completely understand people who do want the surgery – it would be lovely to look at dresses and not have to think, ‘oh, I can’t wear that neckline...’.

That is one of the reasons I love Nicola Jane – I don’t have to look and think ‘that’s nice but I could never wear it’, as I can wear anything they sell. I love my Active Flow sports prosthesis, but my favourite product is the Cami Lace Tie-In so I can still wear some lower cut clothes!


I wanted to share my story because I was so scared when I got diagnosed, and genuinely thought I would never feel properly happy ever again. I want people to know that there is life after cancer, and it doesn’t always occupy your every waking thought.


I just want to say a big thank you to the breast care nurses at Glenfield Hospital for giving me the Nicola Jane catalogue!
Written By Guest Blogger
Leave your comment
Hide comment form