We are pleased to reveal that after months of planning and talking with the V&A Museum exhibition organisers, that one of our most popular styles, the Cara Padded Lace Elegance Bra (7041) is featured in the highly anticipated Undressed: A Brief History of Underwear exhibition, at the world renowned V&A Museum. 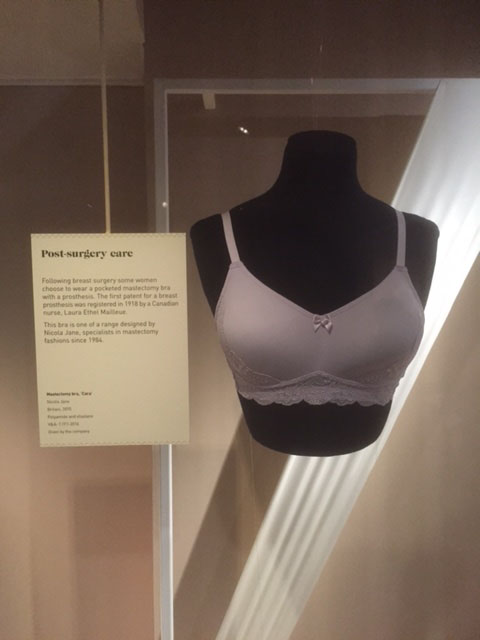 We were first approached by the Susanna Cordner the Research Assistant for Undressed: a Brief History of Underwear, in April 2015. Susanna made it clear from the beginning that the V&A wanted to include a post-surgery bra in the exhibition, as it is such a key development in the under garment that ladies wear every day.

Susanna took the time to travel from London to the Nicola Jane Head Office in Chichester and learn all about post-surgery lingerie, the difference in design, the specific features, the materials used and the discreet changes made to suit ladies post-surgery. After careful consideration Susanna chose to include the Cara Bra. As well as the post-surgery features, Susanna liked the feminine look of this bra, especially in the colour lilac.

As an introduction to the exhibition Peter Lawrence our Managing Director at Nicola Jane, attended a private viewing and launch party on Thursday 14th April 2016, before the official launch on Saturday 16th April 2016.

We found out how he got on!

1) Firstly how do you feel about having a Nicola Jane bra featured as the post-surgery bra in the Undressed: A Brief History of Underwear exhibition?

I feel extremely proud to have one of our post-surgery bras in the V&A Museum. We feel very privileged to have been asked to provide the only post-surgery bra in the Undressed A Brief History of Underwear exhibition, it was great to see it in the display case along with other relevant and historical items in the exhibition.

2) Tell us a bit about the evening…

The evening itself was such an experience from start to finish. Arriving promptly at 6.30pm with my invite, I walked into the fabulous champagne reception, where we were left to mingle with other lingerie industry professionals as well as a few celebrities! We were all treated like VIP’s and it was a fantastic start to the evening. After the initial start we were given a presentation by one of the V&A Museum Trustees who talked us through the concept and the ideas behind the exhibition. After the presentation we were allowed to wander through to the exhibition. Walking through the V&A Museum at night was such an experience in its self, which most people won’t have the opportunity to do.

3) What was your favourite part of the event…?

My favourite part of the event was seeing the Cara Bra (style 7041) in colour lilac, in all its glory sat there under the spotlight in its display case. It is fantastic to see a product which is so popular with Nicola Jane customers, given the credit it deserves.

For those of you who don’t know the Cara Bra was developed due to a number of customer requests we received. The actual design of the Cara Bra was developed and adapted from our best-selling t-shirt bra: Lucy, whilst this is such a popular versatile mastectomy bra, some ladies wanted a bra with the same fit but with a little bit of lace to create a slightly more feminine bra, therefore because of you, the Cara was launched and has been such a prominent style in the Nicola Jane Collection ever since.

I would thoroughly recommend that you visit the V&A Museum and visit the Undressed: A Brief History of Underwear exhibition. If you do get chance to see the Cara Bra please send in a photo of yourself to customerservice@nicolajane.com, next to the Cara Bra and we will post your photo on our Facebook page, we would love to see it!
Written By Nicola Jane
Leave your comment
Hide comment form